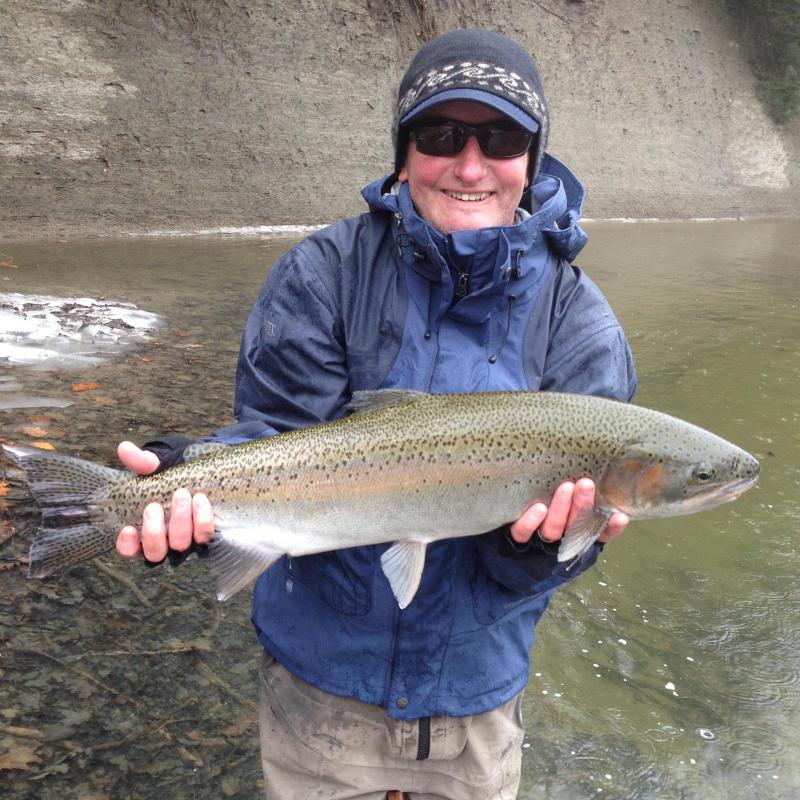 Well folks, better late than never.  A flood level rain event has finally fallen on the drought stricken Erie tributaries.  Fresh runs have occurred and many of the older fish have been redistributed, or have dropped out altogether.  Fishing has hit the reset button, just in time for cooler temperatures and winter weather.  This is what we have all waited for during what will be remembered as the warmest and driest fall to date.

Now that the floodwaters have receded, we are finding a mix of older and very fresh fish throughout the tributary systems.  A significant amount of drop back activity has gone on, as many fish completed their spawning activity during the last few weeks.  Drop back steelhead will be fairly aggressive so long as water temperatures remain above 40 degrees.  Fresh runners will prove aggressive until the water temperature bottoms out, or until fishing pressure takes its toll.

Speaking of fishing pressure, expect it to wane as the mercury falls.  Winter brings a degree of solstice to the tributary angler that rarely occurs during the fall or spring. Recent high water has redistributed fish throughout the system.  Anglers are no longer pigeon holed into fishing only the upper reaches.  The lower areas are now prime for hunting fresh runs.  Fish will move through much more slowly as plummeting water temperatures will restrict movement to a slow and methodical push upstream.

Stray steelhead from other states' programs will also likely show up in the creeks in good numbers soon.   Some are already popping up here and there.  It is my belief that the larger fish run later in the season.  This is likely a function of winter run Manistee strain fish showing up from Ohio and Chambers Creek strain steelhead from New York.  During several of my last few trips, a pod or two of double digit chrome fish were encountered.  These fish were not in the system long, and dwarfed the fall runners.   Their willingness to accept larger, brighter offerings was a welcome change, and sure fire sign that they hadn't been fished over much.

Winter fishing during the past two winters was simply an impossibility by the holidays.  Crushing freeze outs created by the Polar Vortex locked the tributaries up with ice early during both years.  This year's mild temperatures have set the stage for good winter fishing.  Free flowing rivers in Ohio and New York should mean movement of steelhead all winter.  The short lived spring runs of the last two years should come gradually this year, and make for much better fishing.  There was simply no opportunity for winter run fish to come in during the ice ages of the last two years.  This year we hope to see more normal conditions, and more fishable days.

Winter, it appears, has finally arrived.  With it, standing snow and daily UV snow melt will keep the creeks in good shape and green in color.  These are some of the most consistent flows that we see all year.  The tiny winter Stoneflies have begun hatching in good numbers, and the fish are on them.  Tons of eggs are in the drift from the last month's spawning activity.  Congregations of fish are present in deeper pools, and ice has not yet been much of an issue.  The next month or so will likely represent some of the best conditions of the year.  Bundle up, get out, and enjoy it...