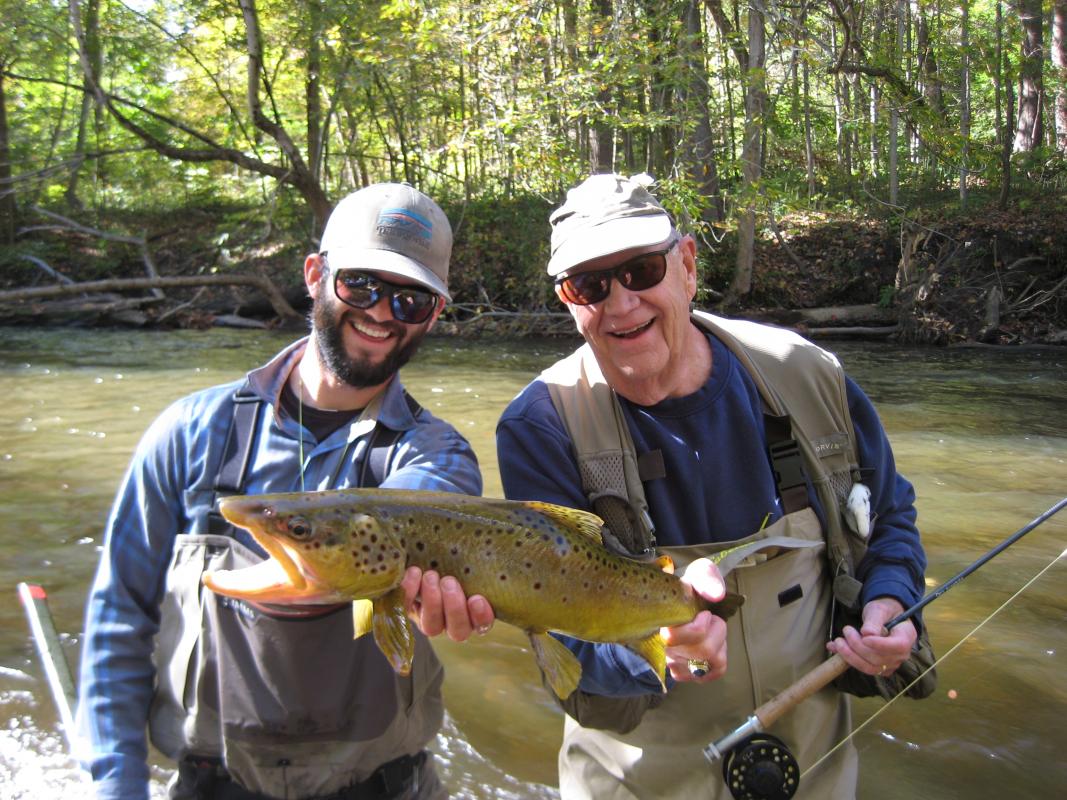 How about getting in a drift boat or a raft, and floating down what looks like a giant spring creek looking for pods of massive torpedoes on gravel bars?   Floating through stands of northern hardwoods too dense to push through on foot.  Pulling off to the side and stalking the sly beneficiaries of spawning salmon; giant marauding brown trout and the biggest steelhead that live in all of the Great Lakes.  Ignoring groups of 20-30 pound salmon, in search of the real prize…

A few years ago, during an admittedly weak moment, I planned an angling adventure with two of our younger guides through Michigan on my annual exodus from Basalt, Colorado to Erie, Pennsylvania in late September.  Neither of my two minions had ever seen a king salmon, or much else east of the Mississippi for that matter.  After a lot of driving and a few wild nights in a place that may have the cheapest nightlife in the country, we engaged the token Michigan king salmon fishing.  A couple of tug of wars with questionably hooked “mudsharks” and we were over it.

What we did find, however, was that there was the riverine equivalent of a tailgate party going on in the sidelines and deeper areas below the salmon.  Scores of steelhead and brown trout periodically darted in and out, looking to score an easy meal of the eggs and insect larvae that washed down from the spawning beds.  They would appear only for a few seconds, and would hastily return to the deeper channels to avoid any entanglements with the apex predator of the Great Lakes, the chinook or “king” salmon.

The one thing that these fish all had in common was that they were big.  The steelhead were generally bigger than our Pennsylvania fish, and the browns were all over five pounds.  Some of the brown trout were huge.  What amazed us, was that the fish present were not there to spawn, as it was far too early and they showed no signs of developing eggs or developing hooked jaws.  The browns were resident trout, not of the lake run variety that often achieve epic proportions.  The steelhead had certainly come from the lake, but they were months from any spawning activity.  It was a scenario that didn’t exist in Pennsylvania, and it was new to us.

After a lot more fishing and investigation it became clear that this was a very special and unique fishing situation.  In a few Michigan streams where very early runs of king salmon occur, brown trout reside year round, and summer run Skamania steelhead coincide, the salmon egg tailgate party occurs.  Guided trips are available during the window of September 25th through October 15th, and are based in southern Michigan in the town of Niles.  Please call for more information.